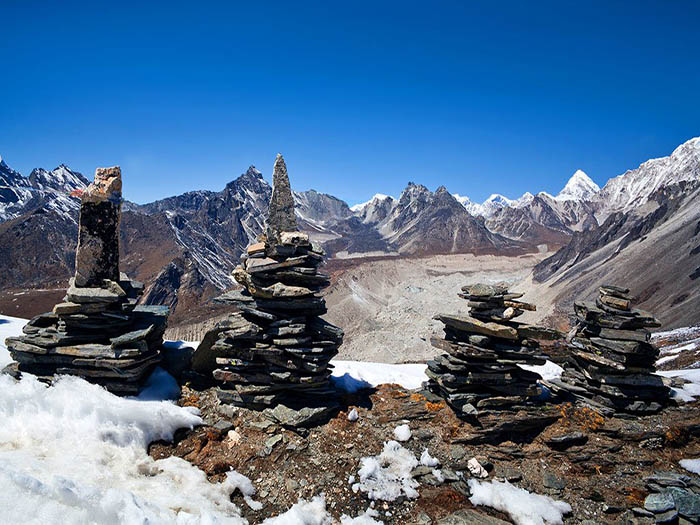 Nepal, the land of the Himalayas, is known all over the world for housing eight of the fourteen 8000m mountains in the world. While the high Himalayas are popular among mountaineers from around the globe, there are several “trekking peaks” in the country which have been equally successful in inviting adventurers who want to do more than trekking but aren’t quite ready for a mountain expedition.

Trekking Peak is a specific permit classification given by the Nepal Mountaineering Association (NMA). It is the least expensive permit available, but it also is given to peaks that generally fall between 5,800 and 6476 meters above sea level. These peaks tend to be less technical in nature, and are mostly climbed by the novice climbers or those with little mountaineering experience. These peaks are also climbed to practice for the expedition to higher peaks. If you are in a very good physical and mental shape and are planning a trek into the Himalayas of Nepal, then adding a peak climb to your adventure is an excellent way to witness the beauty of the Himalayas in a totally different way. Plus, the sense of accomplishment gained from summiting a real Himalayan peak is a feeling that is unmatched by anything else.

If you are wondering which the best trekking peaks in Nepal are, then we’re here to help. Here is a top 3 most popular trekking peaks with brief descriptions so that you can choose the right fit for your next Himalayan holiday.

Probably one of the most well-known and popular of the trekking peaks, Mera Peak, rises to the south of Everest, but in the Makalu Region. A trek to the base camp of Mera starts in Lukla, the same place as the start of many great trekking routes in the Everest Region, including the Everest Base Camp Trek. This peak takes you to a less visited and more remote area called the Hinku Valley within the Makalu Region. The base camp is at 5,300m altitude, situated below Mera La (5415m), and then a next high camp is set up at 5,800m near a rocky outcrop on the Mera Glacier. The high camp offers incredible views of some surrounding mountains including Chamlang (7319m), Makalu (8463m), Baruntse (7152m), Ama Dablam (6856m), Lhotse (8414m), and so on. There are three main summits which are climbable but the most preferred is the Mera Central (6476m). The ascent of the peak is technically straightforward, however, the heavy snow and the maze of crevasses can make the way longer to the summit. However, Mera Peak is an excellent choice for those needing an introduction to mountaineering.

Island Peak, so-called because it was reported to look like an “island floating in a sea of ice”, is another fine trekking peak for the less experienced climbers. Island Peak is in the Everest Region and combined often with the popular EBC Trek for an acclimatization purpose. Another combination includes an Island Peak Climb with a Mera Peak Climb via the Amphu Lapcha Pass (5845m). The Island Peak Climb would probably top anyone’s list as the most spectacular adventures of their life. Seen from the summit are the giant mountains like Nuptse (7861m), Everest (8848m), Lhotse (8414m), Makalu (8475m), Baruntse (7152m), and Ama Dablam (6856m).

Also situated in the Everest region, Lobuche actually has two peaks, and quite often there is some confusion as to what the names are. Most climbers go for the Lobuche East Peak, as opposed to Lobuche West which is often confused as the east peak. Yes, it is hard to imagine a west peak being confused for an east peak, but there you go, it happens nonetheless. For anyone interested to climb this exciting peak, you will be conquering the Lobuche East Peak, which like the first two can be combined with a trek to the Everest Base Camp, or with Island Peak. This peak offers more challenges than its neighbors, Mera and Island, and has a more technical feel to it. It is a better choice for those who have had some mountaineering experience in the past. Views from the summit are as glorious as anyone can imagine and the Himalayas of the Everest region stretch out before you.