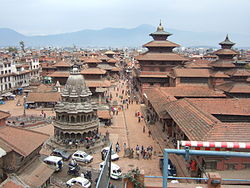 Lalitpur Metropolitan City (Patan):The third largest city of Nepal after Kathmandu and Pokhara and it is located in the south-central part of Kathmandu Valley which is a new metropolitan city of Nepal. Lalitpur is also known as Manigal. It is best known for its rich cultural heritage, particularly its tradition of arts and crafts. It is called city of festival and feast, fine ancient art, making of metallic and stone carving statue. At the time of the 2011 Nepal census it had a population of 226,728 in 54,748 individual households. The city received extensive damage from an earthquake on 25 April 2015. The most important monument of the city is Patan Durbar Square, which has been listed by UNESCO as one of seven Monument Zones that make up the Kathmandu Valley World Heritage Site. The seven monument zones were included in the World Heritage List in 1979 as one integrated site. The monument zones are declared as protected and preserved according to the Monuments Preservation Act of 1956. The Square was heavily damaged on 25 April 2015 by an earthquake. Lalitpur was planned in Vihars and Bahils. Out of 295 Vihars and Bahils of the valley 56% of them are in Patan. The water conduits, stone spouts, Jaladroni (water tanks), artistic gate ways, Hindu temples and Buddhist Vihars adorn the city. The in-built cultural heritage like the royal palace, with intricately carved doors and windows and beautiful courtyards adorned with exquisite icons enhance the beauty of the city. Such art pieces are found in stone, metal, terracotta ivory and other objects. All these artifacts exhibit artistic excellence of the craftsmen and the whole city looks like an open museum.

open all close all

Day1 -  Patan valley sight seeing and rest back to hotel

Day1 -  Patan valley sight seeing and rest back to hotel.

No Images in this album