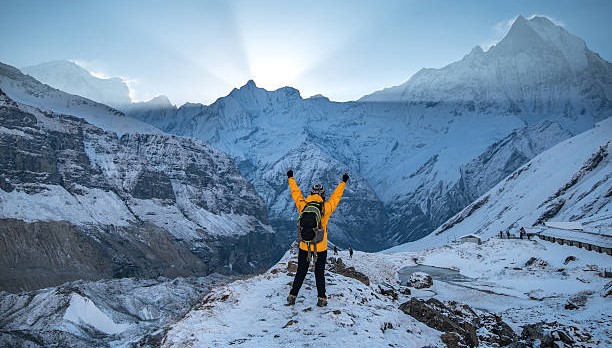 Umm... in real, annapurna region itself is  importantantly beautiful and memoriable, still we have tried to figure out as the major attraction as belows:

Annapurna Base Camp: Annapurna Base camp is one of the very most major attraction to the annapurna trekking region, where 10th Highest mountain Annapurna(8091m),  Annapurna(7219m), Annapurna II (7937m), Annpurna III(7555m), Annapurna IV(7525m),  Hiunchuli(6441m), Mount Fishtail(6993m) can be clearly observed. This Base Camp situated in the elevation of 4130m from sea level, while the trails are very uniqe through vegetation and cultural aspects. So, if the visitors have limited time and plan in budget but wanna touch the high himalaya this is the best option.

Poon Hill: Poon Hill(3210m) is the very famous destination for low himalya region on  Annapurna Region Trekking. This is the a popular hill station from where a beautiful rhodhodendron forest, amazing mountainious views, and outstanding sunrise view can be experienced. This small view point gives the the great oppurtunity to observe amazing natural beauty and mind refreshing experience. Little down from the Poon Hill view point a small touristic village gives you the very warm gurung ethinics experience,  where visitors have chance to see both Hinduism and Buddhism culture and harmony.

Throng La Pass: In the way of  Annapurna Circuit Trek in Annapurna Region Throng-La Pass is the very much popular and adventerous destiny. This is known as biggest pass of the world situated in the elevation of 5416m from sea level. Lot of climbers get altitude sickness while crossing this pass. This pass is the highest elevation on annapurna region besides peak climbing and expedition. so the crossing this pass is one of the adventurous experience and can have tremendous mountain view with early morning sunrise while trekking. This passes join the two district manag and mustang which are known as district behind the mountains.

Tilicho Lake: Tilicho lake situated in the manang district is the highest lake of the world. This lake situated in the height of 4919m from sea level is in the base of Tilicho Peak(7131m). This is also the highest scuba diving sites of the world.This sites is also very famous for finding endangered animal snow-leopard. Due to Its various factor Tilicho Lake is the another very big major atraction on annpurna trekking region.

MuktiNath Temple: A very most important temple in Hinduism just situated in the elevation of around 3800m in mustang valley just below the Thorangla-Pass (5416m) is very important place. Its only one temple in the world where, budhhist monastery , muslim masjid and hinduist temple are build within the same compound and equally sacred.Its also the one of the world's highest temple  belief as and liberation arena. its the final destination after devotation of char dham. Besides this the small touristic town with well facilated lodges and hotel, warm welcoming by native thakali people and their cultural aspects, small shops of traditional tibetan stones and yak wool,s handicraft makes this town very beautiful. As alaways View of Mt.Dhaulagiri, Nilgiri North,Nilgiri central and Nilgiri South with Potala dhampus view makes extremly amazing and relaxing.

Manang Village: Manang village is one of the major destination and acclimization spot in the annapurna circuit trek in annapurna region. Manang village is divided into two which is (old) tanki manang and (new) manang in the elevation of 3519m and 3540m respectively, where lower Mang is mostly designated for visitors with well equipped lodges,tea house spots,shops and resturants. Breathtaking mountain views, Budhhist manastries, praywheel, and budhhist maniwall makes this small village amazinly beautiful and unforgattable. The rest day visitors can visit the gangapurna lake and gangapurna view point in the lap of gangapurna mountain. Either if you like to hike much you can climb to ice lake over 4200m in the east-north from village for well acclimazation and beautiful views too.

Marpha Village: Marpha is a pretty stoned lined village survived the transaction to the current time by cattering visitors and trekkers. Sitting in the base of Mt.Dhaulagiri with having front view of Nilgiri's range with it's beautiful apple-garden field and ancient way of cultivation makes this very unique and beautiful in the Mustang district. marpha is the famous apple and apple brandy of the nation named after village.  Nyingma Monastery, Chaairo gompa, Gandaki river and the Tibetan regugee camp in the southern bank of gandaki river is other valuable things to see in the marpha valley besides its unique trail.

Jomsom: This small town is the head-quarter of mustang district with well-equipped infrastructure. This can be one of the entry and exit point due to jomsom airport is situated. All of the modern facilities such as bank, money exchanger, flight tickets , bus tickets, well furnished lodges and hotels, plenty of shops and cafe makes trekkers to relax and also preparation point for further. Jomsom is also famous for windy place after noon in valley due to the kaligandaki river shore.

Tatopani And Jhinudada:  In the end  of trekking, Tatopani in the annapurna circuit trek and Jhinudada in the annapurna base camp trek is extremly a gift to the trekkers or visitors. This places have a natural hot spring spots which helps to relax and in the healing of your stress on mind and body after bath. which gives you like a happy ending of your hiking days. few beer stalls and well-menued lodges gives you like a great greetings and farewell by the Nepali Hospitality systems in these systems. You can relax one or two days if you have time and interest and can forward to pokhara city next day.