Mt. Everest that lies in Mahalangur Himalayan range has been calling out to trekkers and climbers since it first appeared in the telescope of mountain surveyors, and the trail that climb through the  foothills of  world's highest mountains  offering some of the challenging trekking trails and the best view and experiences.

Everest lies in Khumbu region where the mountains of Khumbu are so large that they create their own local climate .As you climb through the hills, mixed decidious forest and scatterd rice terrace give way to pine forests then rhodhodendrons, then scrumb junipers, finally the only vegetation is low alpine shrubs and grasses.

Khumbu region is the homeland of sherpa people who have become famous for their skills as guides and mountaineers. The buddhist monuments of the sherpas- stupas , chortens , mani walls and gompas mirror the towering land scape all around.

theoritically it is possible to trek in the khumbu year-round,but flights are frequently cancelled in winter and during monsson because of poor visibility  at the Lukla airstrip. The best weather is in autumn when the skies are clear and tempuratures at higher altitude are more bearable. However the competation for seats of plane and bed space in lodges can be intense.

check the weather conditions locally  or with guide/porter before attempting to cross any high passes .(mainly in  wintter) 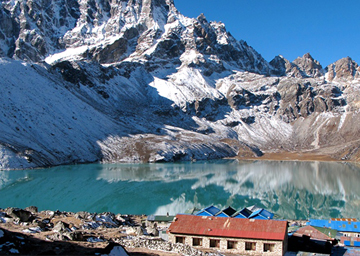